Are Gable Roofs Structurally Weaker Than Other Roof Styles?

Gable roofs are by far the most common roof style you’ll find not only in the Boston area, but across America. Just take a look at the houses along the shore protecting Quincy roofs, or atop one of the many ranch houses across Brockton’s sprawling neighborhoods. But… With so many of these roof shapes, what if there’s problem with the design? 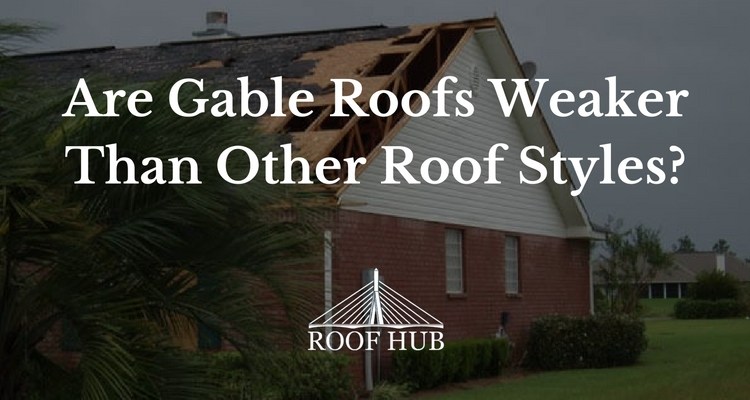 All local roofers you encounter should be familiar gable rooftops because they’re so common in American home design. And if you read until the end of this article, you’ll learn exactly why you may need to be careful if you have a gable roof on your house.

Does having a gable-style roof mean anything special for you as a Boston-area homeowner?

Let’s figure it out!

The pros and cons of having a gable roof on your home don’t matter too much if you don’t actually have one,  so let’s get to the bottom of that first.

The easiest way to spot a gable roof is to look for a triangle, like this: 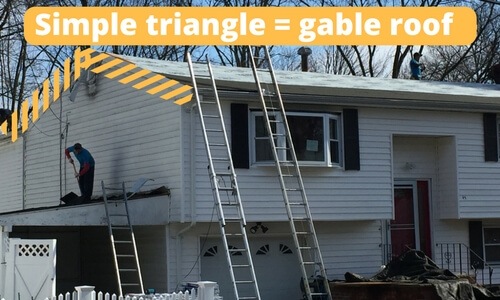 If your roof goes up on one side then comes down on the exact opposite side, then its likely a gable.

Are Gabled Roofs A Flawed Shape For New England Homes?

Just because gable roofs are common in New England, doesn’t mean they’re good for homeowners to have on their home. It’s an important question to consider: are gable roofs enough to protect homes in the Boston area?

Why Gable Style Roofs Can Be Dangerous

According to a 1993 report by the Federal Emergency Management Agency, the protective ability of gable roofs is debatable in areas prone to hurricanes because of the high winds and unpredictable nature of such storms.

But high winds aren’t the only reason you need to be careful if you have a gable roof:

According to the same federal government-backed report, your gable roof may have been made with lesser quality materials than other roof types.

More on this in a moment…

It’s first important to understand how high winds can potentially damage a gable roof. Here’s an example such damage:

Though the Boston area roofs don’t experience hurricanes like those in Florida, blizzard winds sweeping through the area can sometimes climb to hurricane-grade force…

Add heavy snow and you may find a recipe for disaster if the roof isn’t structurally sound! We’re not saying your roof will certainly collapse, but with recent weather getting crazier and crazier, we’re seeing more and more gable roofs buckle under pressure. 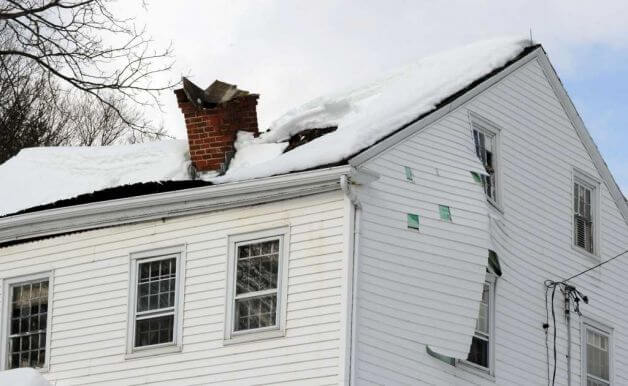 It’s best to be safe. The last thing you’ll want is a roof collapse while watching a January Patriots game!

If the roof’s trusses or framing aren’t properly assembled with adequate support, or if the contractor made simple errors while installing your roof, then gable roofs can certainly be more prone to collapse than roofs of other styles. 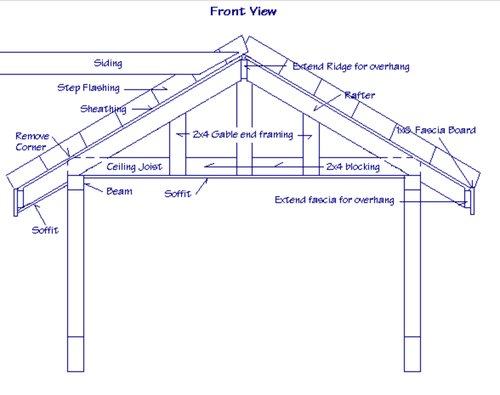 The FEMA study mentioned above was conducted in 1993, one year after Hurricane Andrew (the most destructive hurricane in United States history). Andrew struck land in Florida, but its damage could be felt up the East Coast from the Mid-Atlantic, and into Massachusetts.

In reading through the official report, there’s lots of talk about overhangs having a big effect on the strength of your gable roof:

Does Your Gable Roof Have Overhangs?

High winds may cause materials to peel from gable roofs. If there’s too much of an overhang where the roof meets your home’s siding, then air currents can produce an uplift underneath and cause the roof to remove from the partitions. Depending on the storm (or number of storms over a short span), this can happen quickly.

Many Were Made With Weak Materials

Are gable roofs made with weak materials?

Why would gable roofs be made with lesser materials than other style roofs?

That doesn’t even seem legal, but it does hold some truth!

Many gable style roofs, especially in Massachusetts, were created using an assembly-line-like building process. Ranch-style homes that popped up during the 1950’s South Shore housing boom started with a foundation, then were framed, and so on…

In these cases, roofs were one of the last things installed on the home.

An example of this process can be seen on the Northeast side of Brockton, MA. 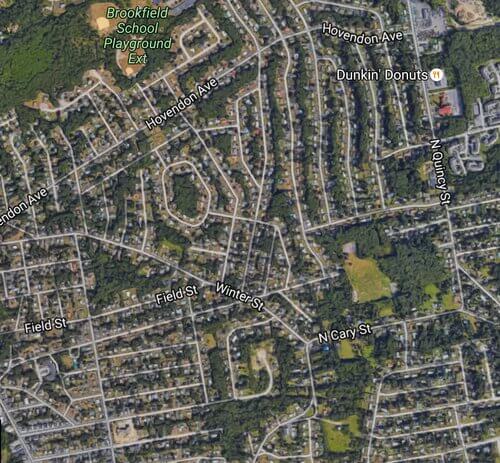 Homes were not built one-by-one, but instead, piece-by-piece. This assembly line process made the construction of giant neighborhoods (like the one in Brockton pictured above) easier for real estate developers who were generally motivated by profit alone.

Since these developers sold homes for easily affordable low prices, every penny counted. And one big place where they cut costs were on the roofing materials…

Now that these homes are over 60 years old, problems are certainly starting to pop up.

This isn’t just the case in New England, but in Florida too.

[pullquote align=”normal” cite=”Federal Emergency Management Agency, 1993″]In most homes, gabled roofs are built using manufactured trusses. Sheets of roof sheathing, often plywood, are fastened to the trusses with nails or staples, and roofing material is fastened to the sheathing. In many cases, the only thing holding the trusses in place is the plywood on top.This may not be enough to hold the roof in place during a hurricane. Installing additional truss bracing makes your roof’s truss system much stronger.[/pullquote]

The structural weaknesses of gable roofs when under stress from high winds PLUS the possibility they were built with lower quality roofing materials means you need to be careful if this is the type of roof you have on your home!

If you have a gable roof and your house was built during the 1950’s, 60’s or early 70’s, then we’re here to help you with an estimate. Fill out this form and we’ll come out to check out your roof inspection. When we leave, you’ll have an estimate guaranteed in writing for two full years. You can call us back whenever you’d like.

Benefits of Having A Gable Roof

The “cons” (stated above) of owning a gable roof may seem extreme, but it’s not all bad! Having this style of roof on your home comes with many benefits too!

Because of their simple layout, having a properly ventilated roof is easier when you have a gable roof opposed to other roof styles like a hip, mansard, or gambrel roofs.

Unlike these other roof styles, gables can have not only a ridge vent, but also “gable vents” (hey, go figure!) and intake ventilation such as soffit vents. With summers getting so humid in the Boston area, it’s critical to have a properly ventilated roofing system. So if you have a gable roof, it’s easier to check off ventilation on your to-do list!

Because they’re so common, all roofing contractors have experience with re-roofing a gable roof. This experience makes the pricing cheaper than if you had another style. On top of this, gable roofs in the Boston area are generally found can on smaller homes.

If you’re going for a simple layout on the exterior of your home, then having a gabled roof comes with additional exterior home design benefits. It’s easy on the eye and presents a nice canvas if you choose a new roof color with some pop to it! If you have a white home with blue shutters or a blue door, we’ll always recommend GAF’s Biscayne Blue architectural shingles!

The combination of a new roof on your home and the fact it’s a gable style will make you a dream for solar companies like SolarCity. Owning a gable roof will make it easy to install solar panels on one side of your home (wherever the sun hits), so hellooo energy savings!

There are several different types of gable roofs you should be aware of. Here they are:

Front Gables vs. Side Gables

Front gables and side gables are the two most simplistic variations of gable roofing systems.

How to easily spot the difference!

How are they the same?

Each variation has two size-equivalent sections that are pitched with an angle. They meet at the peak of your home’s roof, where most reputable roofers will install a ridge vent if one does not exist already.

Have you ever seen a roof that looks like another roof is coming out of it? A roof that’s giving birth to another roof?!? You’re likely looking at a crossed gable roof. Here’s an example of what a cross gable roof looks like: 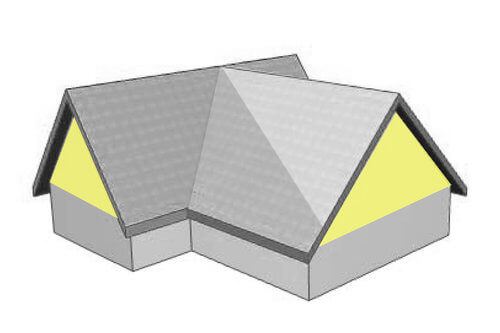 With a crossed gable roof, both ridges are perpendicular to each other. Pitches, lengths or heights may or may not vary from one another; but this depends on the home in question..

Crossed gable roofs are a very common style across the south shore because they are an “upgraded” version of the straight gable, so to speak. With so many straight gable roofs built in assembly-line style during the 50’s, this style is more of a premium version because with it also came a bigger home.

In Britain, dutch gable roofs are called gablets and they look like this:

What makes the design of Dutch Gables more appealing?

They have a more architectural pop to them, which is preferred by many homeowners.

Because of their more complex design (in comparison to other types of gable roofs), gablets are widely considered stronger than straight gables. They’re more comparable to hip roofs in this way.

Having a gable style roof on your home has it’s pros and cons.

In areas prone to high winds, there are certainly more cons to having a gable roof than if you live in an area that doesn’t get such strong wind. The fact many homes with gable roofs were built in an ‘assembly’ fashion further complicates things too. However, the replacement cost and ventilation benefits alone make the pros of gable roofs outweigh the cons.

And as roofing technology improves throughout 2016 and beyond, it won’t matter much which roof style you have…

As long as you choose roofing materials that are the right fit for your home and geographic location, that is!

Make sure you have a ridge vent, breathable underlayment, and a strong 50 year architectural shingle. If you check off these three boxes, you’re well on your way to completely eliminating the cons of having a gable roof.

Choose the right roofing contractor on top of this, and the cons will basically be fully eliminated.